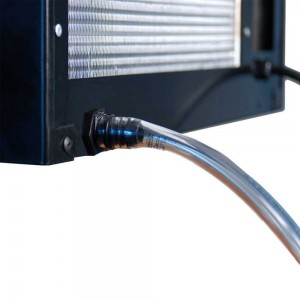 We receive many calls from customers, contractors and HVAC/R technicians asking what to do about the condensate drain line – where to put it, whether to use a self-contained evaporator or a pump, or if they should build a drain specifically for the drain line. They experienced moisture and condensation generated by our competitors’ refrigeration equipment, and want to be prepared.  Smart!

Good news – CellarPro does not suffer from the same design flaws, and generates very little condensation, providing a cellar is airtight with a moisture / vapor barrier. There may be some excess condensation during initial pulldown or in a cellar that is frequently accessed, leaving the door open, but for the average cellar, the cooling units do not generate extensive moisture.

CellarPro has super sized evaporator coils and compressors, allowing the system to do its job without running the evaporator below the dew point, which means the coils achieve high BTUH without chilling too low.