Tuscany is one of the Italian regions synonymous with prestigious fine wines. With approximately 60,000 hectares as surface planted with vines, 18 DOCG (the highest certification), 50 DOC and 6 IGT, it is one of the most productive and well known wine regions in the world.

In addition to talented winemakers, the reason for this success lies in the environment. Tuscany’s beautiful region has a temperate climate, with cool summers, mild winters, and little rain. The great majority of the countryside is hilly and it is here that viticulture is practiced, favoring the quality of the highest level, with peaks of absolute value.

Tuscany is predominantly a land of great red wines: about 70% of the production comes from red berried grapes, such as Sangiovese (and its variants), Canaiolo and Ciliegiolo. Among white berried grapes, there are Trebbiano Toscano, Malvasia Bianca, Vernaccia and Ansonica.

Let’s explore the most famous jewels and the hidden gems of Tuscany. 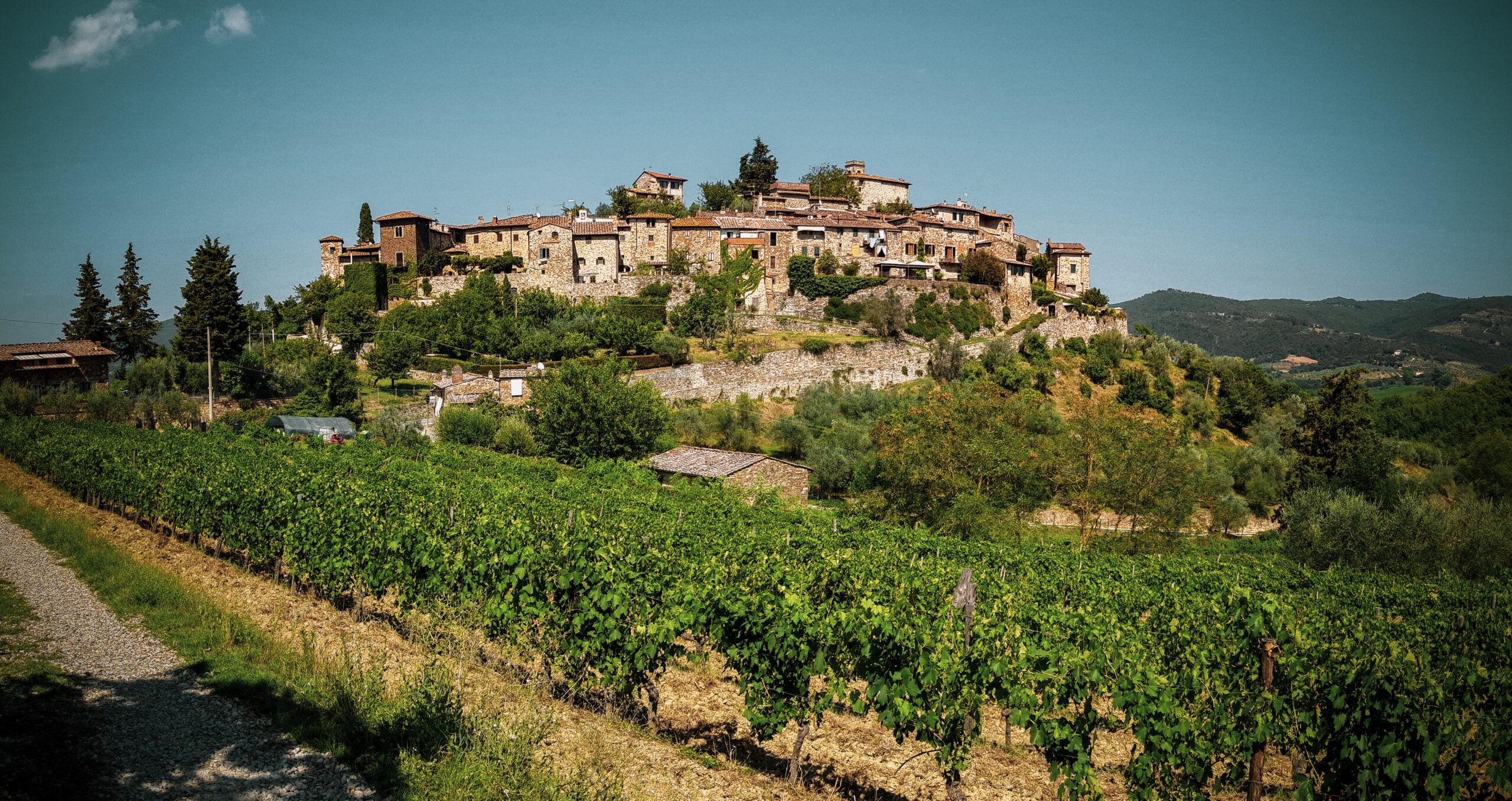 Brunello di Montalcino is the king of Tuscan enology. The production area of Brunello di Montalcino is limited to the town of Montalcino, near Siena, which contributes (because of the limited area planted with vines) to its world-wide popularity. It is made with a variety of Sangiovese grapes known locally as “Brunello” because of the dark color of berries (“bruno” means dark in Italian).

It requires long periods of aging before being released on the market: five years from the moment of harvesting (which become six for the “riserva” version) of which at least two are spent in oak casks, and for no less than another four months in a bottle (six months for the riserva). As a result, Brunello di Montalcino is a wine of great longevity. There are examples of bottles aged for periods ranging from 10 to 30 years and more.

In the glass it has a deep ruby red color, slightly tending to garnet red with aging. The bouquet is intense and persistent, with hints of wild berries and vanilla as well as aromatic wood and tobacco. The palate is tannic and warm, harmonious, persistent and robust.
This wine should be served at room temperature (about 18-22°C), in large glasses to enhance perception of its complex and articulated bouquet. In case of vintage wines it is preferable to decant them beforehand for proper oxygenation, while getting rid of the deposit on the bottom.

It is perfect for pairing with strongly flavored foods with rich sauces or gravies (for example: wild boar, venison, fallow deer, turkey and hares), aged cheeses, stews and braised meats.

Chianti is perhaps the most famous Italian wine, a true icon.

The hilly area of Chianti lies between Florence and Siena, between Arezzo and the Pisan Hills and is considered the ‘heart of Tuscany’. It is a succession of beautiful landscapes marked by thick vineyards, chestnut woods, oaks and holm oaks, picturesque medieval villages, romantic castles and charming farmhouses. All Chianti is DOCG, but the wines are different, each with its own characteristics linked to its territory and production methods.

Although the percentages vary, the grapes are always the same: Sangiovese (mostly), Canaiolo and Malvasia del Chianti. The tradition is so deeply rooted that Tuscan winemakers plant the different vines together, already in the right proportion that will be used to make the wine. In autumn, after the harvest, you may see some bunches of grapes still on the vines: this is a sign of the practice of “governo”, which has survived over the centuries, consisting in adding fresh must from dried grapes to the fermented wine, which restarts fermentation so that the sugars are completely transformed into alcohol. The aim of this operation is to obtain a dry and stable wine.

After fermentation, the wine is left to mature until March in steel tanks and, once bottled, is ready for the market. If the wine is aged in wooden barrels for several years, including at least three months of refinement in the bottle, it may be entitled to the “Riserva” qualification. The “Classico” indication is reserved for Chianti produced in the oldest area.

The color is a lively ruby red, the aroma intense with evidence of violets, iris and vanilla, while the flavor is harmonious and dry with hints of almonds; with age it becomes smoother. Recent vintages are perfect wines for the whole meal; the aged ones are preferable with red meats and hard cheeses. The traditional accompaniment to Chianti is obviously the Florentine steak, a true Tuscan institution.

Bottles are stored horizontally and should be served at room temperature.

The Vernaccia di San Gimignano Riserva is the premium white wine in the region.

It is produced on the hills of San Gimignano, near Siena. This typology must undergo a period of refinement, including both in wood and in bottle, for at least one year. The color is straw yellow with golden highlights that are more accentuated with aging. On the nose there are delicate aromas with fruity fragrances which can evolve into spicy and mineral notes with time. On the palate the wines have a dry, harmonious, savory flavor, sometimes with a characteristic almond aftertaste.

Vernaccia di San Gimignano wine enhances many gastronomic combinations. It finds its natural place in Mediterranean cuisine where extra virgin olive oil dominates. It is an excellent choice for first courses with white sauces, rice salads and pasta. The wine is optimal with vegetables of all seasons and any seafood dish: baked, fried, grilled or baked in foil, as well as raw fish. It goes well with various fried foods,  eggs and it is wonderful with white meats prepared with or without sauces. Pair with fresh and medium-aged cheeses for an exquisite flavor combination.

The serving temperature should be between 10°C and 14°C.

When we speak of Vino Nobile di Montepulciano (literally “noble wine”) we are referring to the elegant red wines produced in the territory near Siena, from the Sangiovese grape variety, known in this area as Prugnolo Gentile. This grape within the denomination is often vinified in purity, but it is not the only grape allowed for the production of this wine: often accompanied by Canaiolo Nero, Colorino and Mammolo. Vino Nobile di Montepulciano must mature for at least 24 months, 36 months for the Riserva, most of which in casks or barriques.

The characteristics of Vino Nobile di Montepulciano are the vivid ruby red color and a complex bouquet with notes of black cherry and violet. With extended time aging in a cellar, tertiary sensations of vanilla, liquorice and tobacco appear. It has the traditional tannicity of Sangiovese and the welcome note of residual freshness, softened by ageing and the full structure of this wine. The traditional accompaniments are grilled or baked red meats, game and mature cheeses for the more complex and structured versions. 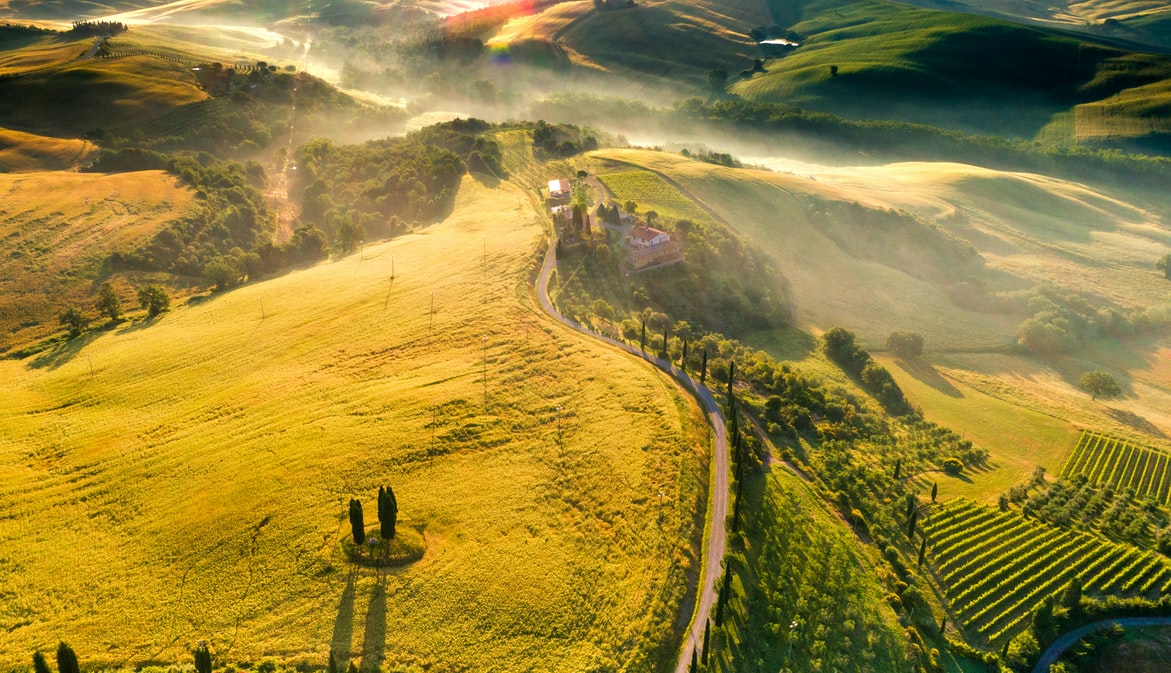 A true Tuscan gem, this sweet wine is called ‘santo’ (holy) because it was used during religious services.

The main grapes used are white: Trebbiano Toscano is joined by Malvasia Bianca, Grechetto, Passerina and San Colombano, depending on the area of production. The “Occhio di Pernice” type, on the other hand, is created from Sangiovese grapes with the possible addition of other typical white varieties. The grapes are harvested late in the season and left to dry in well-ventilated rooms. In this phase, aeration is  important: it reduces water in the grapes and avoids the formation of dangerous mold. The dried grapes are then pressed and fermented in small barrels (caratelli) with a volume of about 50 litres. The fermentation of this must, which has a very high sugar content, can last for months or even years. Traditionally, the musts were added to barrels containing yeasts.

The color of Vin Santo ranges from straw yellow to golden or deep amber. The intense and characteristic perfume is ethereal, sometimes of honey, nuts and sultanas. Velvety and harmonious, the flavor is dry or  distinctly rounded and sweet. It is persistent, with hints of caramel, almonds, ripe apples or sweet spices such as vanilla.

The “Occhio di Pernice” has a beautiful pink color with fruit-forward flavors. On the palate it is mildly sweet, but always soft and velvety. Vin Santo is an excellent accompaniment to pastries such as the traditional Tuscan cantucci, ricciarelli, buccellato or castagnaccio, in addition to blue cheeses like sweet gorgonzola.

The curious case of the Super Tuscans

These superb red wines are the result of the courage and creativity of a handful of producers and winemakers who decided to adopt the use of different grape varieties and barriques in a region where the tradition of Sangiovese and large casks reigned; willingly renouncing the DOC and DOCG designations traditionally associated with wine quality.

The distinctive feature of Super Tuscans is that they are made from grapes traditionally grown in the Bordeaux area, such as Cabernet Franc, Cabernet Sauvignon and Merlot, varieties that make up the so-called Bordeaux blend. These were the first grapes planted in the area, followed by other international varieties such as Petit Verdot and Syrah.

The inability to include them in the categories scheduled by the production regulations gave rise to the term Super Tuscan, and so these wines belong only to the IGT category (certainly not for lack of quality!)

Wines like Sassicaia, Tignanello, Solaia and Grattamacco have long been considered among the finest and most expensive bottles in the world.

About the author: Chiara Marchini is a professional Italian Sommelier and Bartender. She travels both in the old and new world to enrich her knowledge about wine and spirits taking part in events, tastings and harvests. From Europe to the Americas, from South Africa to Australia always from the vineyard to the glass and has always enjoyed writing about it.