When you think of modern wine storage, visions arise of swanky custom home cellars and stainless steel wine cabinets calibrated to perfection and humming pleasantly to keep bottles cool for the next big dinner. But have you ever thought of why wine is stored in bottles in the first place?

Before electricity or even the invention of the corkscrew, our founding fathers in winemaking worked tirelessly to explore available resources for storage efficiency and maximum return on investment. Priorities have changed—the Romans, for example, were often more interested in quantity and alcohol levels than nuances or bouquets—yet the goal to keep wine safe and secure remained ever at the top of the list.

From Greece to ancient Georgia, the wine-fueled innovations of our ancestors provide an indispensable look into the origins of wine storage as we know it. Though their storage solutions existed long before technologies that could stabilize temperature, humidity and vibration, many of their common-sense practices still apply to how we store wine today.

The earliest wine enthusiasts toted receptacles made out of animal skins or bladders for accessible wine storage. Due to their organic materials, these wineskins did not stand the test of time, yet references are made throughout history.

The Bible cautions against new wine in an old wineskin, Shakespeare’s Falstaff rocks one in Henry IV and a wineskin played a central role in Odysseus’ outsmarting of the Cyclops Polyphemus in Homer’s Odyssey. Portable, durable and downright fashionable, wineskins served as convenient hipflasks for our earliest forms of mobile sipping.

Kvevri: Keeping it cool since 6000 BC

To produce and store wine in large quantities, egg-shaped clay earthenware were the original choice. Kvevri (also spelled qvevri) originated in Georgia as some of the oldest winemaking pottery on the planet.

These massive pots were lined with beeswax and used in every step of the winemaking process, from grape crushing and fermentation to long-term storage. Once filled and capped with wooden stoppers, the kvevri were buried underground to let the earth provide natural regulation. This burial ensured a cool, stable temperature to protect the freshness of their beloved vino, thus completing rule number one for proper wine storage. 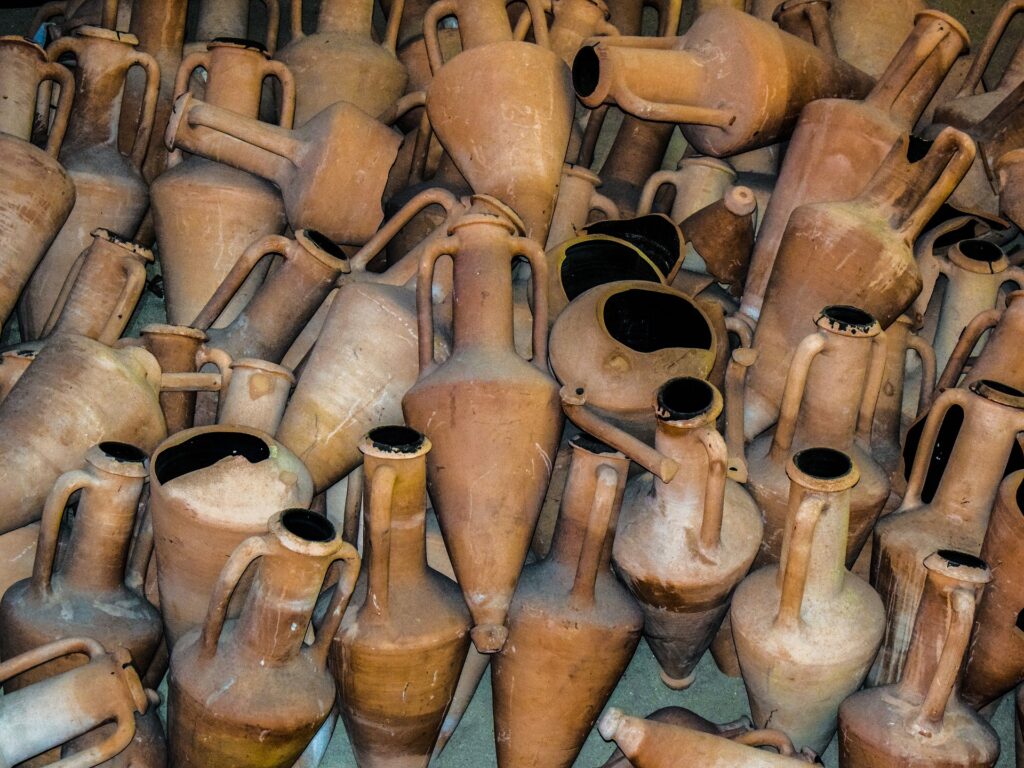 Amphorae were large clay vessels originating in the days of ancient Greece and Rome. Tall and slender with a consistent size, amphorae ushered in an era of standardized wine quantities and international trade. Need to ship a few hundred gallons to your neighbors in Spain? No problemo, thanks to the ingenuity of ancient engineers who designed large handles atop each clay amphora.

The containers were strung up like batches of grapes and hauled en masse aboard ships, making the international wine trade safer and more reliable. An amphorae’s narrow shape also allowed easier burial when cooler temperatures were called for, as was common practice with their kvevri cousins.

Oak barrels: Now with a purpose 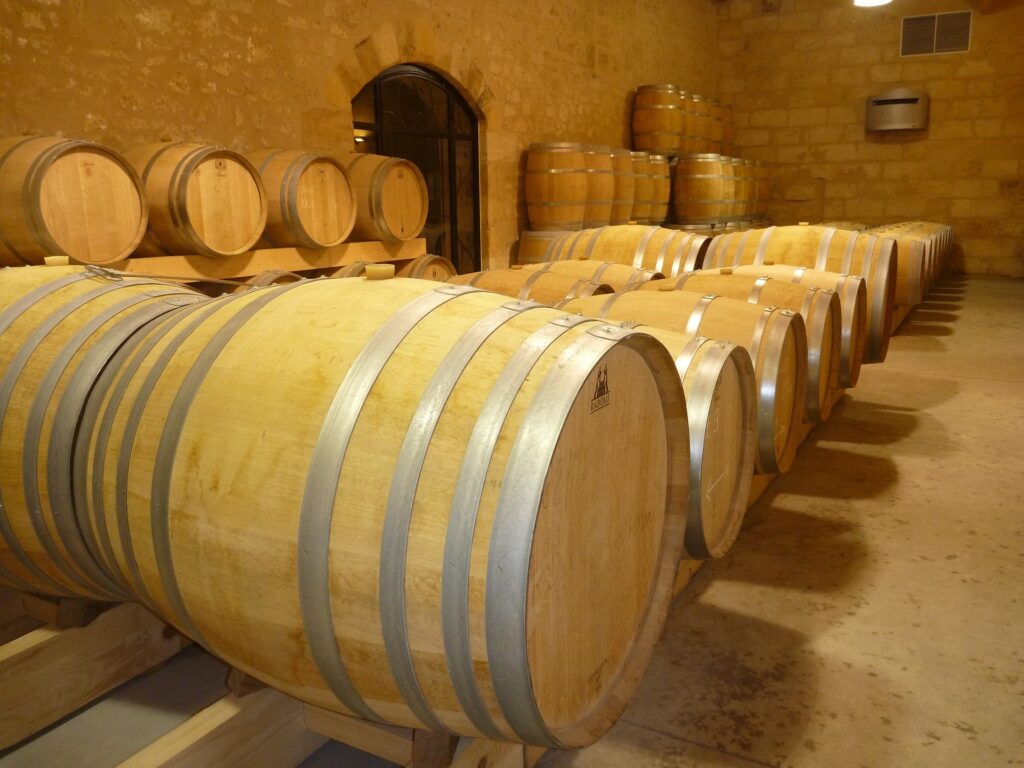 Flash forward to the age of Roman expansion, when the Gauls introduced the Celt’s invention of the wooden barrel. This crucial discovery quickly resulted in barrels surpassing amphorae as the preferred wine storage method and becoming widespread by the third century AD. Oak trees were ubiquitous throughout Europe at the time, leading it to become the obvious choice for barrel construction.

Interestingly, oak was largely chosen based on this availability as well as the relative ease with which the wood bends, not for its trademark characteristics we know today. Oak’s convenience predated any deliberate intent to imbue budding wine with oak’s magical properties, thus making our modern wine-aging tactics a happy accident.

Although the invention of glass didn’t come around until 3000 BC, in 100 BC the Romans were the first to take a molten lump of glass, prop it along the end of a hollow pole, and blow it into a bubble that could be formed into bottles. Delicate, fragile and horrible at traveling, these glass bottles were mostly decorative and not a prime pick for utilitarian storage.

But in the 17th century coal-burning furnaces came about and brought an end to glass as a purely decorative function. These furnaces allowed blazing hot temperatures for thicker, darker glass that had never before been achieved, making glass bottles a viable option for commercial wine. The growing trend of aging wine prompted longer, sleeker bottles that could be stored on their sides to avoid spoilage and catch sediment.

While earlier amphorae were topped with organic matter (think reeds, grass, wood or wet clay), the introduction of the cork was another game changer in wine storage history. Although medicinal bottles were the first don cork hats, it was Englishman Robert Hooke who devised the use of cork for sealing wine bottles.

When glassblowing became re-perfected and glass bottles stepped on the scene as a viable method of storing and aging wine, cork became a preferred stopper allowing wine’s ever-so-slight continued contact with the outside world. With that finishing touch, wine’s evolution from a mega-batch of grapes in an underground pot to the sleek bottles aging in your wine cellar was officially complete.

Should you find yourself aching for that clay pot aged-underground taste, a handful of winemakers today are exploring traditional methods and making wine the kvevri way. Whatever your tastes may be, modern methods offer the full range of options for the wine-storage experience—and if history’s any indicator, there may be even more to come.

What’s your favorite wine storage method? Do you prefer the classic cork and glass bottle, or seek out greener solutions?

About the author: Liz Demakos is a New York native and beverage enthusiast, serving as managing editor for CRAFT by Under My Host, editor and writer for Mutineer Magazine, and Wine Riot content and events specialist for Second Glass. She currently lives, works, and imbibes in San Francisco.